Permanent magnet lodestones contain magnetite, a hard, crystalline iron ferrite mineral that derives its magnetism from the effect the earth's magnetic field has on it. Various steel alloys can also be magnetized. The first big step in developing more effective permanent magnet materials came in the 1930s with the development of Alnico alloy magnets. These magnets take their name from the chemical symbols for the aluminum-nickel-cobalt elements used to make the alloy. Once magnetized, Alnico magnets have between 5 and 17 times the magnetic force of magnetite.

Ceramic permanent magnets are made from finely powdered barium ferrite or strontium ferrite formed under heat and pressure. Their magnetic strength is enhanced by aligning the powder particles with a strong magnetic field during forming. Ceramic magnets are comparable to Alnico magnets in terms of magnetic force and have the advantage of being able to be pressed into various shapes without significant machining.

Flexible permanent magnets are made from powdered barium ferrite or strontium ferrite mixed in a binding material like rubber or a flexible plastic like polyvinyl chloride.

In the 1970s, researchers developed permanent magnets made from powdered samarium cobalt fused under heat. These magnets take advantage of the fact that the arrangement of the groups of atoms, called magnetic domains, in the hexagonal crystals of this material tend to be magnetically aligned. Because of this natural alignment, samarium-cobalt magnets can be made to produce magnetic forces 50 times stronger than magnetite. Headphones for small, personal stereo systems use samarium-cobalt permanent magnets. Samarium-cobalt magnets also have the advantage of being able to operate in higher temperatures than other permanent magnets without losing their magnetic strength.

Similar permanent magnets were made in the 1980s using powdered neodymium iron boron which produces magnetic forces almost 75 times stronger than magnetite. These are the most powerful permanent magnets commercially available today.

A special iron oxide, called a gamma iron oxide, is often used in the manufacture of magnetic tapes for sound and data recording. Other materials for this application include 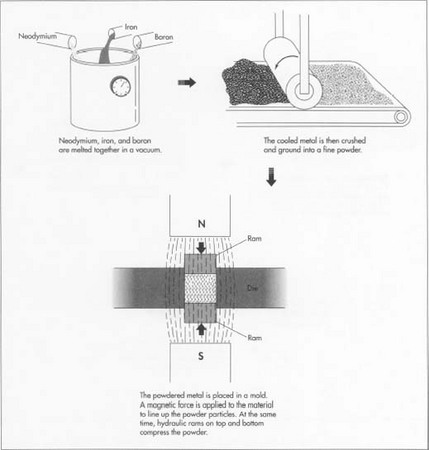 cobalt-modified iron oxides and chromium dioxide. The material is finely ground and coated on a thin polyester plastic film. 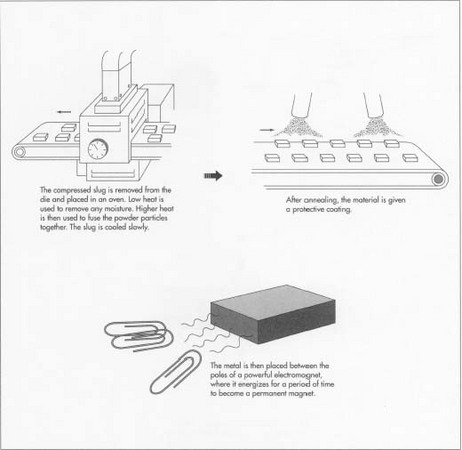 Just as the materials are different for different kinds of magnets, the manufacturing processes are also different. Many electromagnets are cast using standard metal casting techniques. Flexible permanent magnets are formed in a plastic extrusion process in which the materials are mixed, heated, and forced through a shaped opening under pressure.